API Success On The Pitch

Jun 13 Posted by API in Dispatches 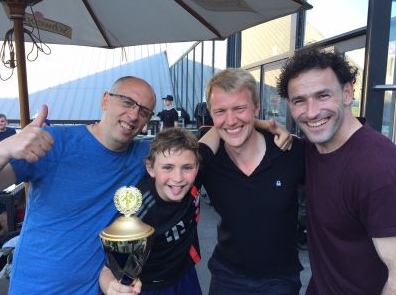 Needless to say that the Austrian Dream Team won once more.

The API-team, led by skipper Augustin Palokaj, made up of newspaper (Augustin, Pablo, Oliver), radio (Sebastian), television (Markus) and online-media (Nikolaj) colleagues plus sons (Silas and Gordian) and friends (Mentor, Andy and Chris) of journalists, kept cool in the decisive penalty shoot out.

It was our youngest player – Silas, aged 12 – who showed the way by not only scoring twice from the penalty spot, but he was also chosen as 'MVP' – Most Valued Player - of the tournament.